Sometimes you are doing a bit of research and you come across some data and think, ‘that would be far easier to understand if I could turn it into a map using GIS’. Or maybe I’m just a bit strange. This is exactly what happened when I was looking into what the likelihood is of my broadband speed increasing in the next few years. The out come for broadband is not good, but the journey produced a map which shows just how dire the situation is for much of rural Ireland.

The government have recently launched their broadband.gov.ie website as the first stage towards intervening to bring ‘High Speed Broadband’ to all premises in Ireland. Surprise, surprise the private companies or commercial interests have no interest in providing a service to rural areas. The first stage of the States intervention is to quantify the total number of premises and, of that total, how many will have high speed broadband provided by commercial operators by the end of 2016, the State is proposed to intervene and install high speed broadband for those premises that don’t have high speed broadband by then. All the data is presented down to townland level on the website, but for purposes of the map below I have used the county data.

The map below was produced using QGIS. 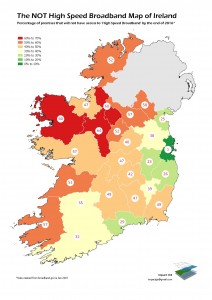